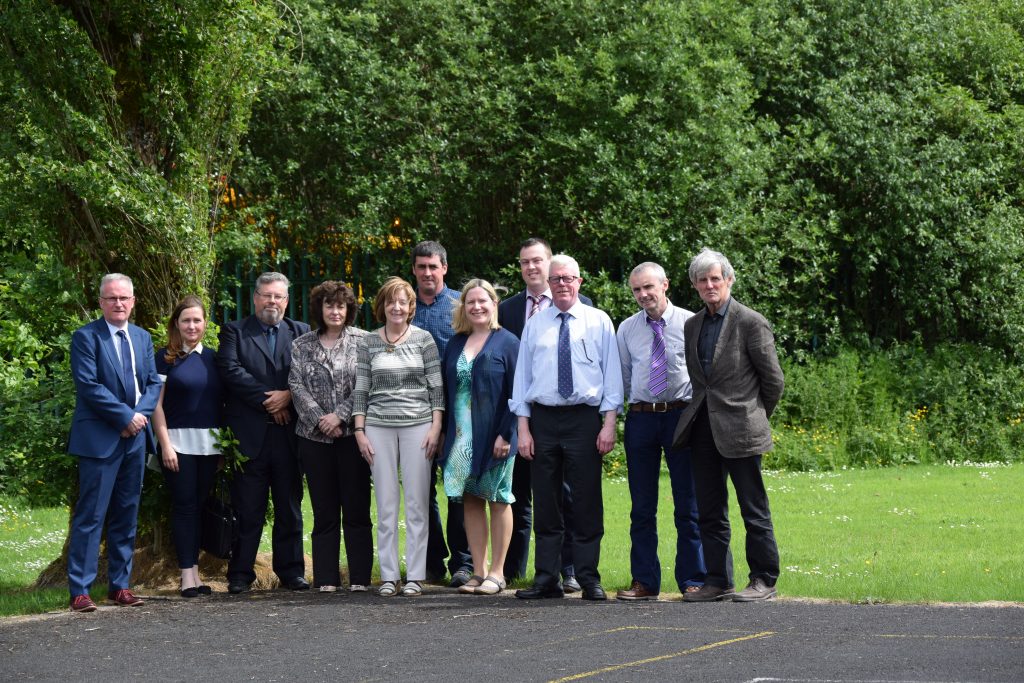 Pre Meeting at St. Anne’s today. Contractors, Glenman Construction, on site from July 3rd to begin the extention to the school. More information to follow. 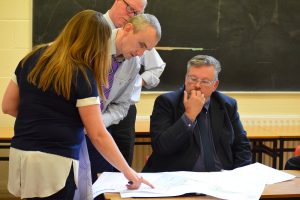 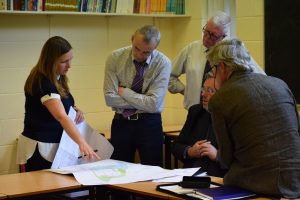 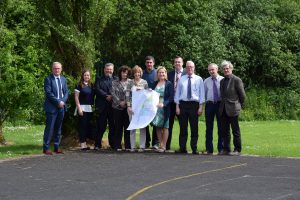 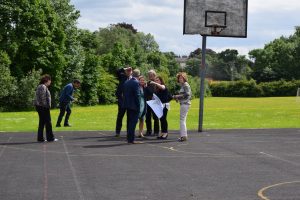 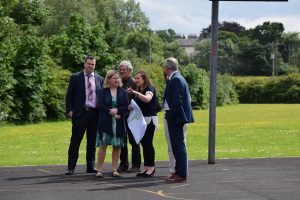 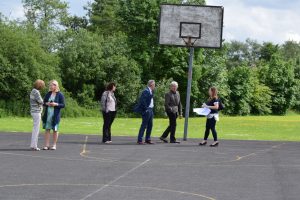 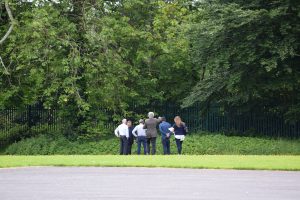 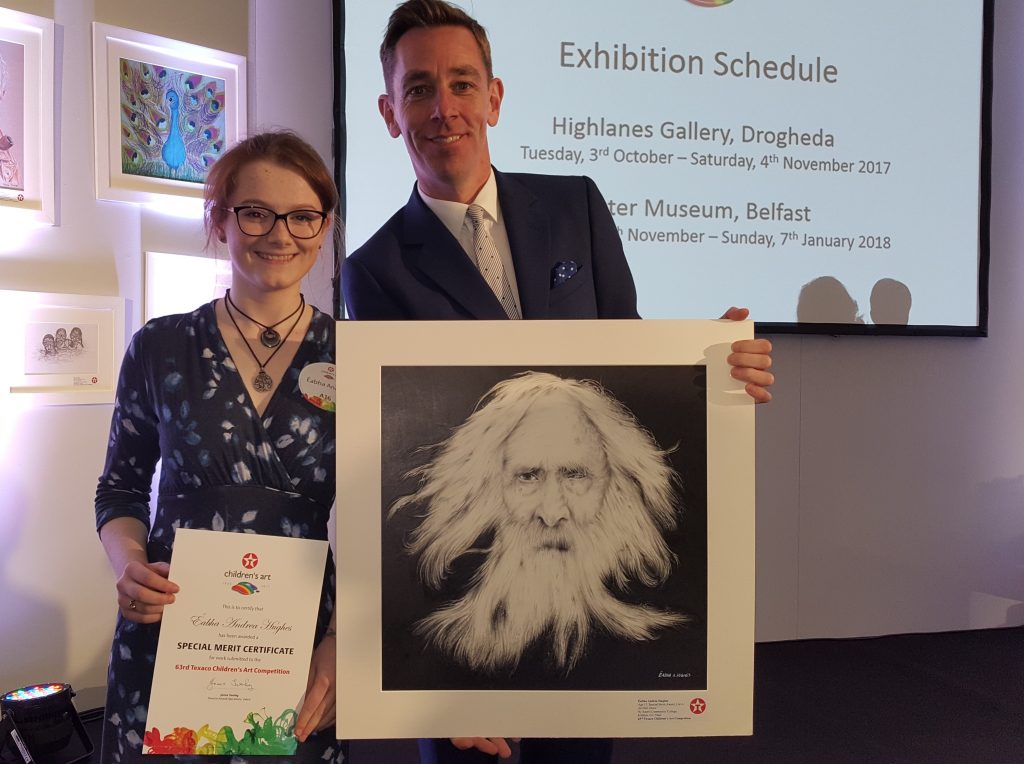 Congratulations to Eabha Hughes (4th year) who won a special merit award in the Senior category A at the Texaco Art Competition this year. Her piece entitled “An t’Súil Ghéar” (The Sharp Eye) which consisted of black pencil on white paper. Eabha travelled to the Royal Hospital Kilmainham, on May 25th to collect her award from the Texaco Award Ceremony. Eabha collected her prize from host Ryan Tubridy and Professor Declan McGonagle. 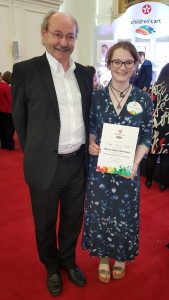 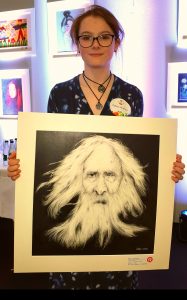 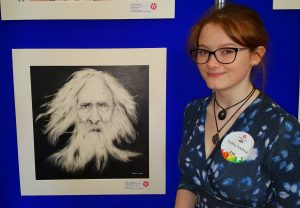 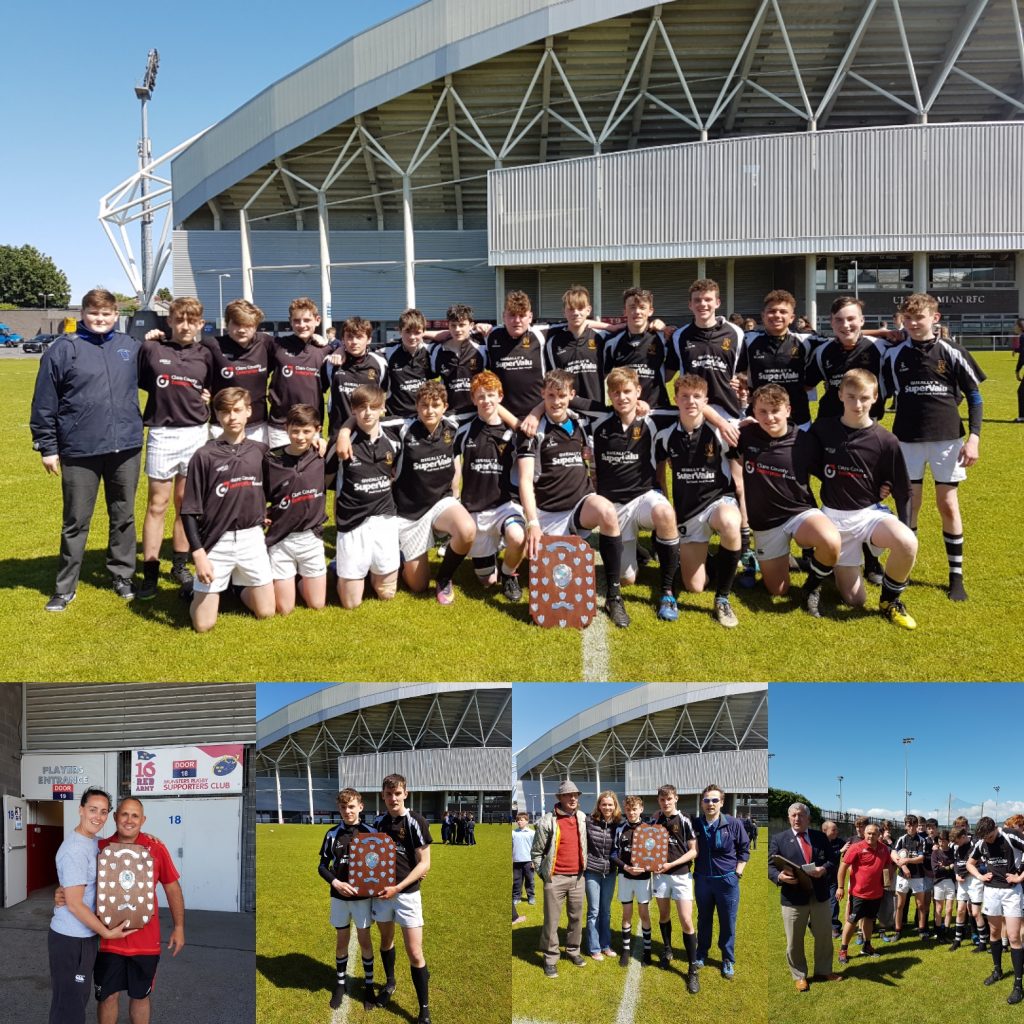 Rugby has gone from strength to strength this year and has been very evident by the number of finals they have reached in both boys and girls rugby.
The U16 boys team reached the final of the Giles Shield this month and there was great excitement ahead of the game after the victory by the U19 team to win the O Gorman cup.
There was a great sense of nervousness on Tuesday as the boys travelled from Killaloe into the grounds of Thomond Park where their game would take place on the back pitch. A fitting backdrop for the two Munster teams who both had hunger and a drive for success. St. Anne’s were taking on the Kerry side from Intermediate School Killorglin who would definitely be a strong match to the Killaloe team.
The match kicked off at half 1 with nerves on both sides evident from the whistle. After a long passage of play, St. Anne’s gave up a penalty and ISK took full advantage with a penalty going over. St. Anne’s 0 – 3 ISK after 5 minutes. This was not the start Killaloe had wanted but under the encouragement of captain Joseph McEvoy the boys reloaded from the kick off securing good possession and bringing up the field. After some fancy footwork by the backs, Liam Hart went over for the first try of the game. Liam also converted the try leaving the score St. Anne’s 7-3 ISK. The teams were very equally matched with great plays by both teams. After some great breaks by the ISK players, a penalty was awarded for coming in from the side and ISK would capitalise on the infringement by slotting over another 3 points. With the half time whistle the score was St. Anne’s 7 – 6 ISK.
The start of the second half, St. Anne’s came out with all guns blazing and again showing some great skill by both the backs and forwards a great team try was scored by Liam Hart, his second of the game. He converted his own try to leave the score St. Anne’s 14 – 6 ISK. It was important to keep this pressure on and this is exactly what St. Anne’s did. Joseph McEvoy receiving a pass from Liam stormed up the outside beating three defenders and even finding another gear to make sure he scored in under the post for a great individual effort by the captain. Liam Hart converted to bring the score line to 21-6. With some tired bodies from both sides, this immense battle continued with both packs showing their power and strength. After some power carries by the ISK players, they would capitalise on some good possession with a try of their own. This would be converted bringing the score to 21-13 in the final 10 minutes of the game. There was a nervous energy for the final 10 minutes on both camps but the fantastic supporters from St. Anne’s school rallied their troops to give them the push on they needed to close the game out. With the final whistle, there was a scream of delight as St. Anne’s were victorious and claimed their second ever rugby trophy for the school. The second within as many weeks.
Final score St. Anne’s 21
ISK Killorglin 13

A special thank you to Tyrone Elliott and Tony Carey for their help and assistance at training. 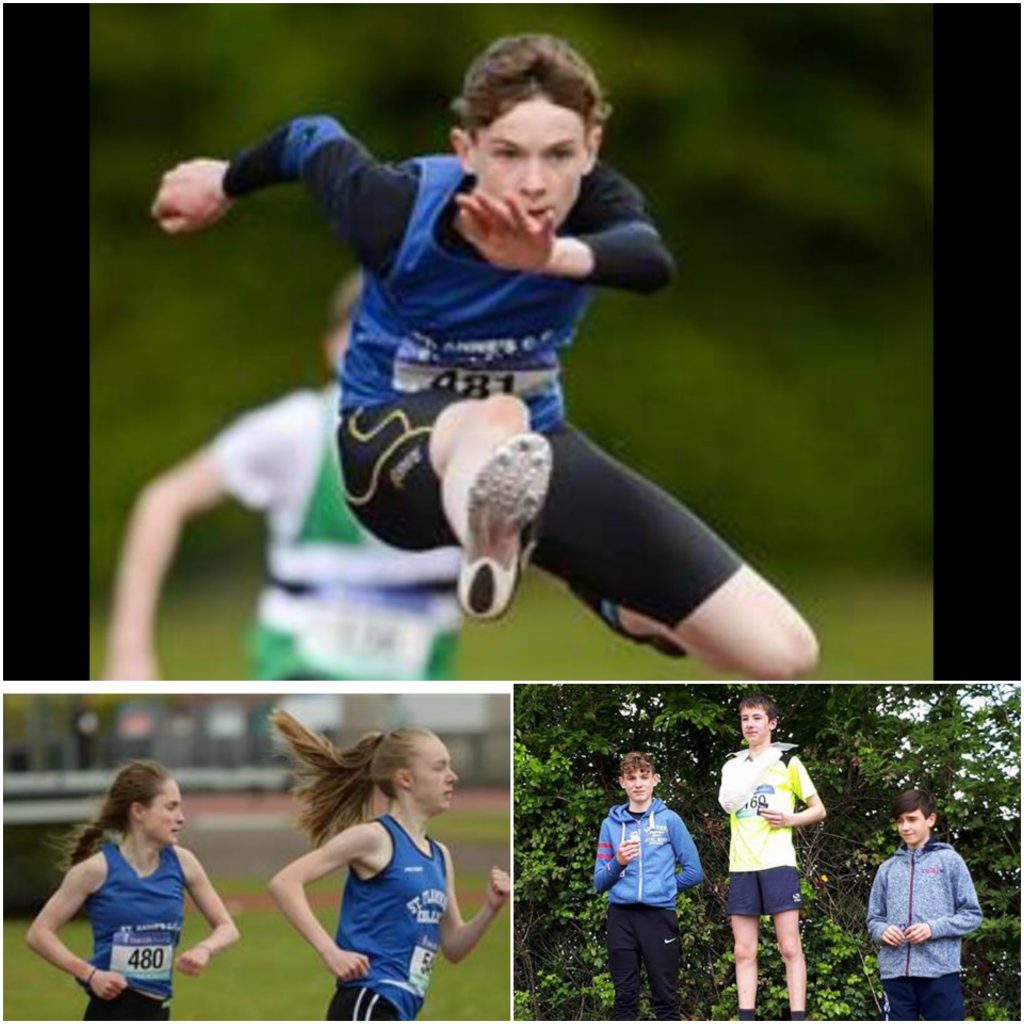 Congratulations to the students who represented the school this weekend in the Munster Schools Athletics finals in CIT, Cork on Saturday.
Jack McEvoy (2nd Year) continued his winning ways with an impressive victory in the Junior Boys 80m hurdles in a time of 12.89. Jack also competed in the Junior Boys Javelin finishing in second with a best throw of 34.22m.
Sarah Lane (2nd Year) had a great race in the Junior Girls 800m with a time of 2:22.12 to finish in second.
Dean Mulqueen (4th Year) competed in the Intermediate boys 200m finishing just outside the medals in 5th place.
Cathal McKeogh (3rd Year) competed in the U16 1 Mile run and came in 5th.
Well done to all the athletes who travelled and best of luck to Jack and Sarah who will go forward to represent the school in the All Ireland Finals in June. 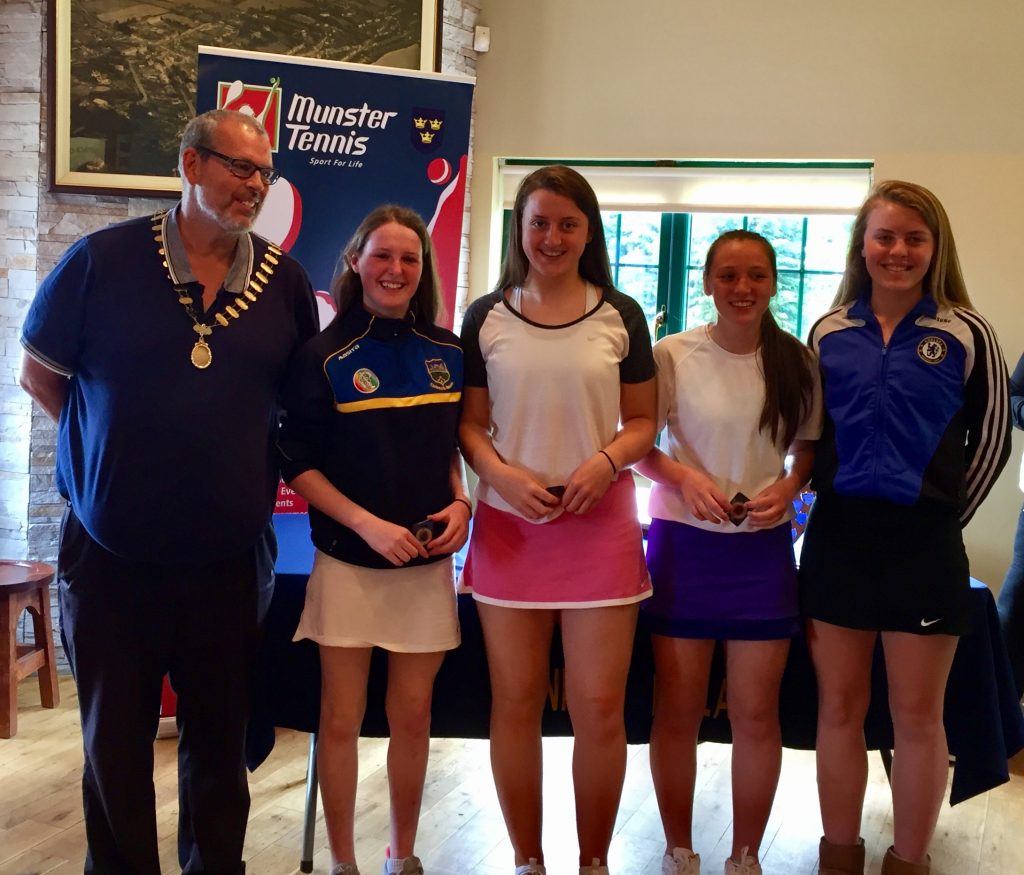 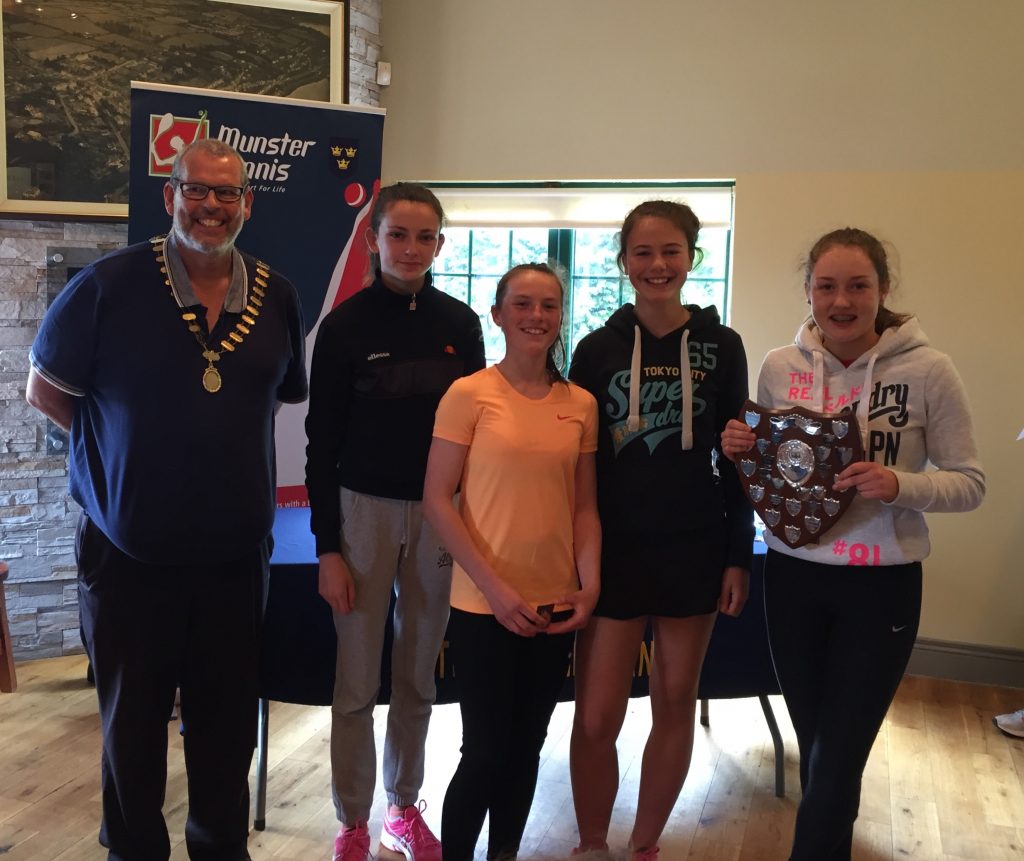