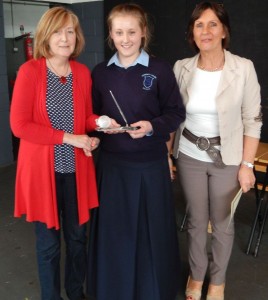 Our annual Awards Ceremony took place on Thursday 19th May 2016 where over 120 students received an award/certificate in recognition of the successes and achievements across a wide range of activities.

At the end of each year St. Anne’s Community College hosts an end of year Awards Ceremony to acknowledge and reward the achievements of individual students and teams of the college over the year.

This is a very special event in our school calendar and we are delighted to showcase and celebrate the successes of our students.

Certificates for good attendance and exemplary behaviour will be issued later.

Students involved in the Gaisce programme will receive their medals later in the year when the results are known.

Sport is very significant in the life of the school and there is a strong tradition of success.  Athletics, Badminton, Camogie, Gaelic Football, Hurling, Rugby and Soccer are amongst the sports provided.

This year’s Sport Star is Moya Ryan who was recognised for her achievements in Badminton during the year at School and National Level.

The Under 15 Camogie Munster & All Ireland Champions were the undoubted winners of Team of the Year.

Moya Ryan is this year’s recipient as voted by the teaching staff, not just for academic achievements but for her overall contribution to the school community. 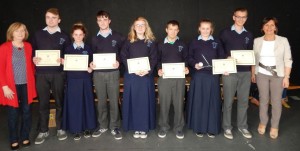 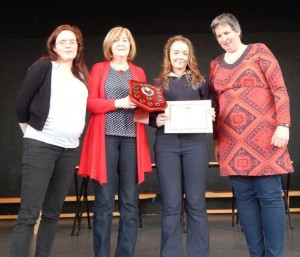 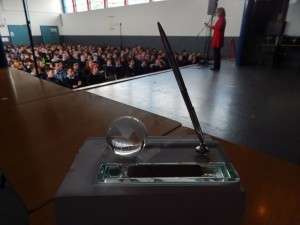 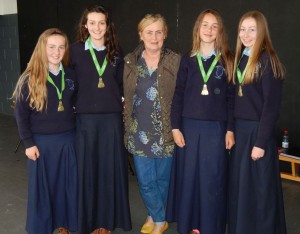 It was another successful fun run in St. Anne’s today with both teachers and students dressing up under the theme of People who made History in the last 100 year.

The race started at 1pm with a large crowd running it. Niall Moloney (4th Year) was the first boy home closely followed by Finn Looney (2nd Year). It was a family affair in the ladies race with younger sister Sarah (1st year) narrowly beating her older sister Ellen Lane (TY).

Congrats to all who won prizes and who got involved. A huge thank you to Mr. Murray who organised the event. 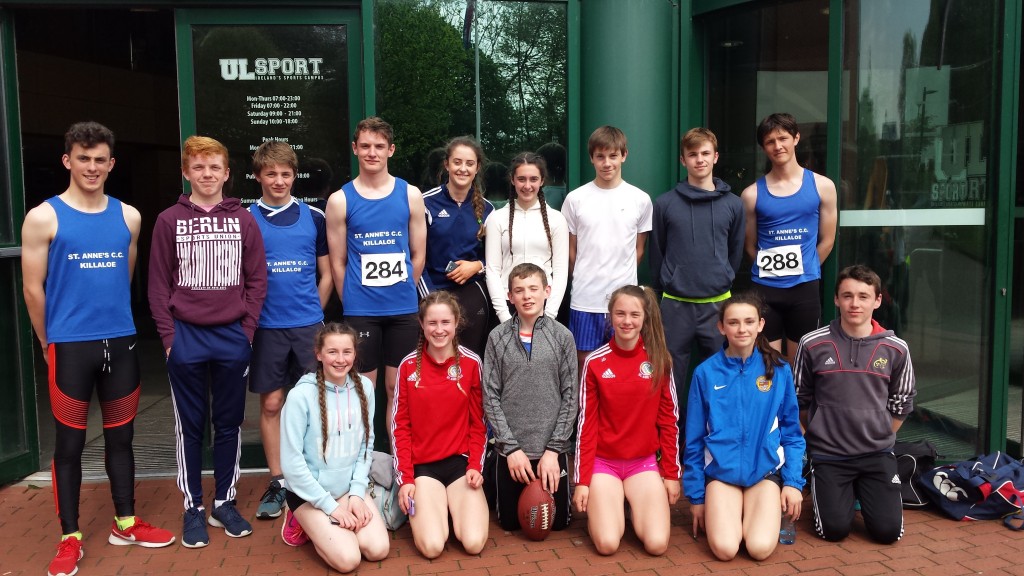 Well done to the school athletics team who competed in the North Munster meet in Castleisland on Tuesday and UL on Thursday this week. The students all competed extremely well bringing home many medals.

Results are as follows: 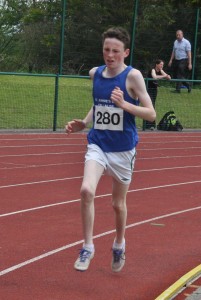 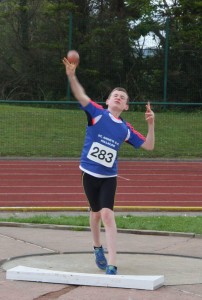 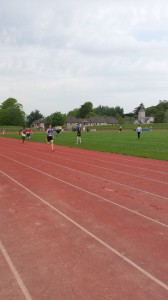 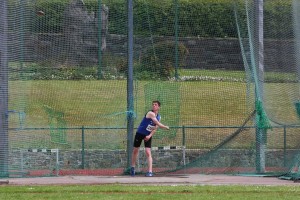 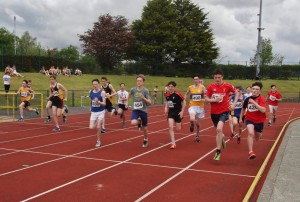 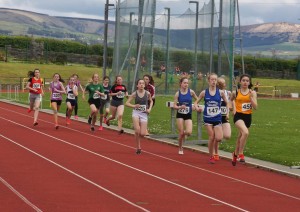 The final scoreline flattered the winners who opted to play against a slight breeze in the first half. It was a very entertaining game, where with fifteen minutes remaining on the clock a minimum of one point separated the sides. From this point on St. Anne’s dominated the game, scoring 1-6 without reply.  Arguably the turning point in the game was when CathalMcKeogh scored a goal late on in the second period to put the contest out of reach.

St. Anne’s raced into an early lead and were four points up with eight minutes gone compliments of two points each from Conor Power and Dylan McMahon. Presentation Ballingarry registered their first point on the 12th minute, following this up with some excellent points and a crucial goal scored by their full-forward.  Anthony Ryan. St. Anne’s kept the scoreboard ticking over however over the remainder of that first half, with some well executed scores taken by Liam Hart, Davy Boland,  Evan Connolly and a free on the stroke of half time from Dylan McMahon leaving a minimum of two points between the sides at half-time on a scoreline; St. Anne’s 0-8, Presentation Ballingarry 1-3.

St. Anne’s came out of the blocks quickly in the second half, scoring two points in quick succession on the 36th and 37th minute through Dylan McMahon and Sam Loughran.PresentaionBallingarry came storming back scoring a fantastic goal on the 37th minute. A titanic battle developed between the sides for the next ten minutes  with the minimum of one point separating the sides by the 45th minute. However, one further point from play and two frees from Dylan McMahon, a point from Dara King and Evan Connolly, two pointed frees from Mike Gough and a well taken goal by CathalMcKeogh saw St. Anne’s score 1-6 without reply in that final quarter to clinch the title. Hugh determination, work ethic, method, fitness and markmanship were the contributory factors to their success.

It was very much a team performance with no fewer than nine players getting on the scoresheet. Liam Hart was named man of the match for his outstanding fielding of the ball, excellent defensive display and even chipping in on the scoreboard. Captain Dylan McMahon led by example from the start putting in an excellent performance, fielding some great ball, linking the play very well which also contributing personally with no less than seven points (4 frees) over the course of the game. Their defence also deserve great credit as a unit. They were watertight in the last 15 minutes, continually heaping pressure on any opposition player in possession of the ball and forcing them into mistakes. Players such as Mike Gough, Liam Hart, Sam Loughran and Patrick Lucas were very solid in defence, exhibiting some excellent fielding while all the half-back line contributed to the scoresheet. Meanwhile players such as Evan Connolly, Conor Power, Dara King and  CathalMcKeogh also made telling contributions in attack, while the link play of David Boland was once again of the highest quality.

Overall it was a very solid team performance where everbody performed. It was a good campaign for the school with victories over ColaisteDúnIascaigh, Cahir, Mount Sion CBS, SMI Newcastlewest, St. Josephs Borrisoleigh and Presentation Ballingarry.

Congratulations also to teachers Mr. Colm Hayes, Mr. Shane Golden and Mr. Mike Casey for all the hard work they put in throughout the year with the lads. Credit is also due to Mr. Seamus Walsh, Mr. Michael Gough and Mr. Kelvin Harold for their valuable input. Well Done to all. 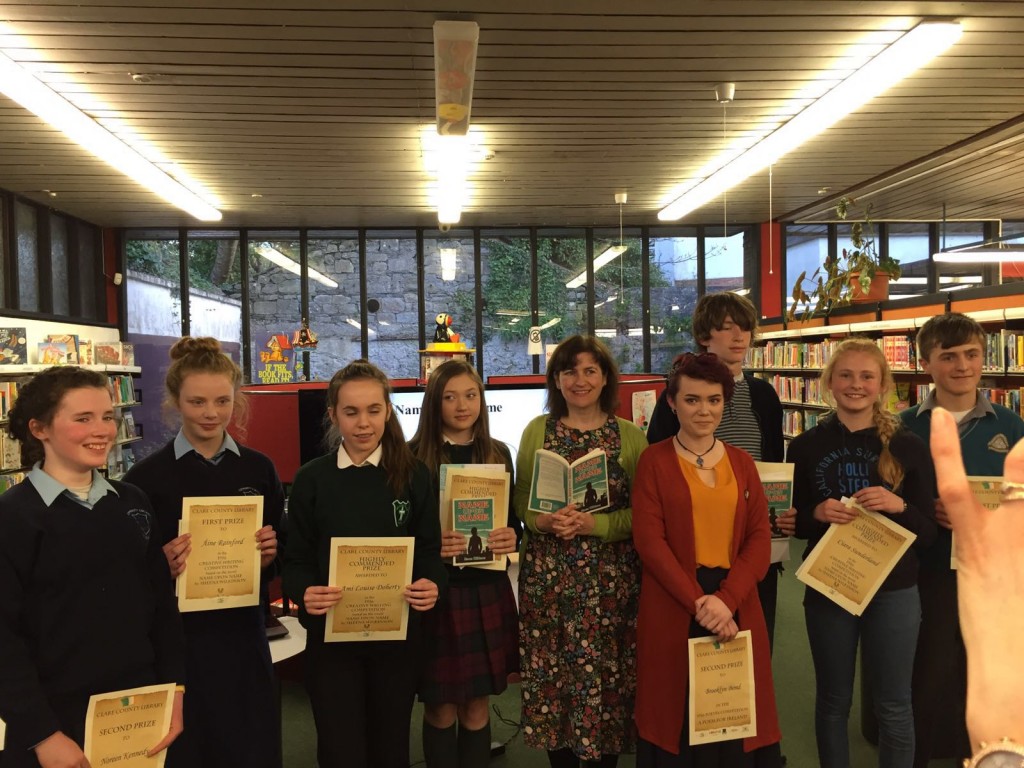 Clare County Library’s annual Teen Week saw a diverse and enjoyable programme of events delivered to teenagers in Ennis, Scariff and Killaloe libraries during the second week in April. As well as the variety of events taking place, the students from the County were also given the opportunity to enter various competitions in creative writing.

Award-winning author Sheena Wilkinson was on hand on the night to give out the prizes to the winning students in the different categories.

Áine Rainford (1st Year) was the winner of the creative writing competition. All prize winners read their poems and prose writing for an audience of fellow students, teachers and parents in what was a most enjoyable event for all present on the evening.

Congratulations to all the students who entered the competitions and a thank you to their English teachers, Ms. Shanahan, Ms. Noonan, Ms. Murphy and Ms. O’Brien for mentoring the students. 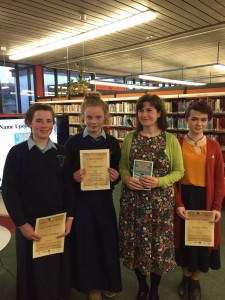 This journal thing is a wee bit strange. I was just thinking (although it was a student who suggested that I should writing a jorunal) I never really have gotten the hang of it.

I would like to say I have benefited from this writing experiment, but that’s up to wee Helen and her mother to decide.

It’s been a few weeks since the rising.

There is a thought at the back of my mind and it’s been there all week. I feel I must write about it; Michael.

We are all very worried about him.

After Helen went on her wee adventure to Derryward, she came down on the train (the following Monday) with Michael.

I managed to sneak in a wee conversation with Michael the night before he went back to the front.

We sat, cheeks blushed from the burning fire beside us, and we talked and talked.

He was scared and felt guilty, as any one in the lad’s situation would have felt.

He took a deep breath. Then Michael spilled his heart out…

He killed a man. Not even a man, a boy. Though he had no choice. An order is an order.

I was glad that he had told me.

Michael and I had always clicked, even when he was a wee lad.

When Sean was not behaving himself, or having a moment, Michael would always have a place at our house to stay if he needed it.

It was important he could tell me these things.

Though he should be able to talk to me like a papa.

His own papa wouldn’t talk to him.

After our talk, Michael stood up slowly, hands on his knees.

As he started walking towards the door on his way to bed, he tripped over a ruffle in the rug and fell on his knee awkwardly. He jumped up without a bother on him. All that training, I thought.

He had cut his knee. It had started to bleed. He stumbled to the kitchen, trying to avoid getting blood on the tiles. He got some tissues, and pressed hard on his cut.

He was grand, but what surprised me was his reply after I asked him if he was okay.

“It hurt more than I expected. Less than I deserved.”

He looked at me with a meaningful expression before walking off to bed.

He was thinking very hard about something.

Something worse than a sore knee.

We both knew it.

An inner demon? All of his sins? A dead boy lying in a pool of his own blood by the GPO?

I just hope the lad can forgive himself, or by god we’ll all be sinners.

On a compeltely different note…

I have been thinking of Helen a lot lately. Sometimes I think she might feel as though she is playing a giant game of tug of war, Helen being the rope.

Family, friends, parents, cousins, you could say, all on different sides.

I cycled to my dear pal, also a teacher, in Newcastle on Good Friday.

We talked a lot about education for girls and jobs and that kind of stuff.

Helen kept on popping into my mind, as she is fourteen now.

I want Helen to become everything and anything she wants to be.

I hate to see such clever children throwing their futures to waste, going to the mill, or the shipyard at such a young age.

I do hope Helen will go to Belfast Collegiate. I am really trying to encourage all my students to go to college.

I must go now, I really should write more often. I’m happy to say I do find joy in writing this. In these dreadful rebellious days you can’t tell anyone anything without the worry of them snitching. When I write, I feel as if I’m telling someone.

Helen just walked into my office. She offered me a cuppa.

She really has grown up this past year.

Sometimes I forget she’s only fourteen…